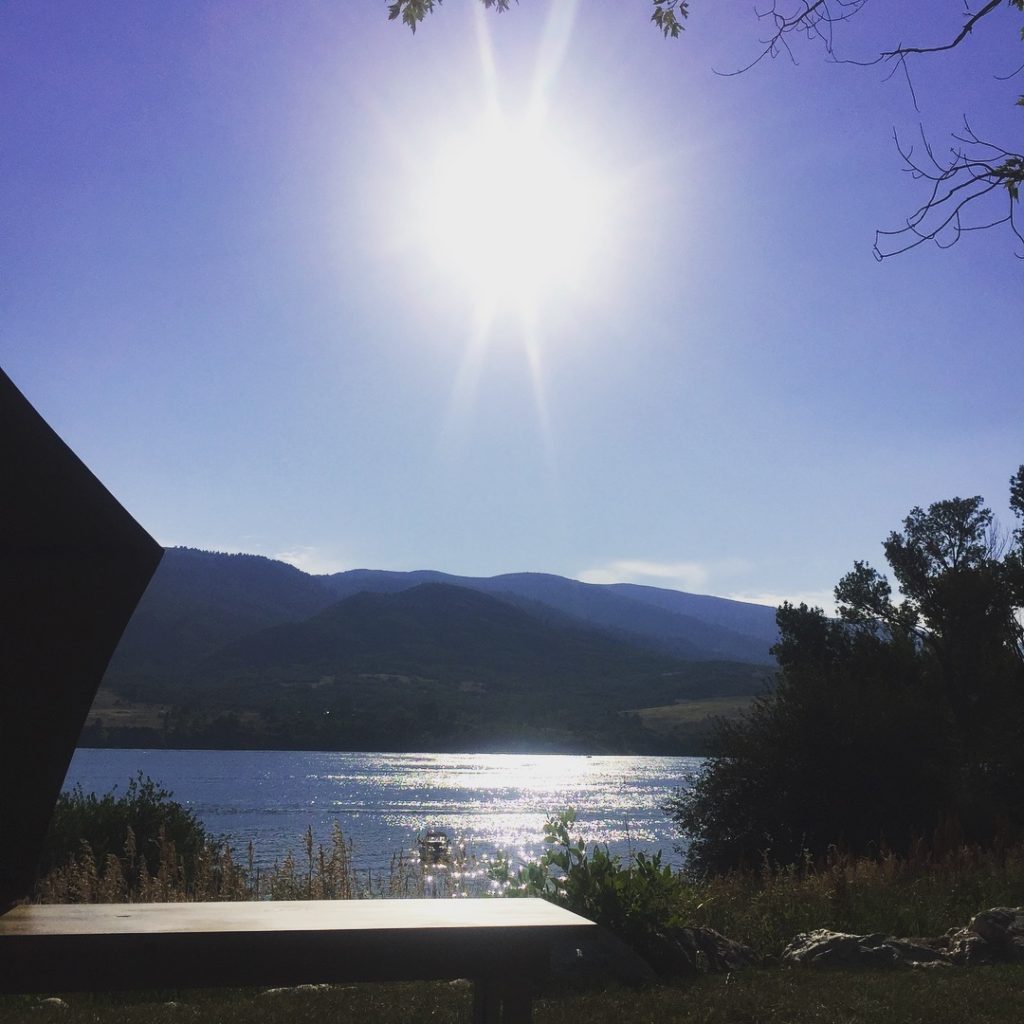 Last weekend I went up Summit Series at Powder Mountain.

“Summit creates unique gatherings designed to catalyze entrepreneurship, creative achievement, and global change to create a more joyful world.” You can read that on their website.

They do this with big flagship events on ships like ‘Summit at Sea,’ in magical remote locations like Tulum and since buying Powder Mountain in Utah, the largest ski mountain in America, in 2013, about a half dozen curated salon weekends there each summer and winter. In 2014 I tore my ACL and meniscus on Powder Mountain. It was my fifth time skiing, my first time not skiing at Mammoth Mountain and my second time not having a lesson earlier in the day.

This past weekend, with my new ACL, angry cartilage and frayed meniscus I returned to Powder Mountain and went on a group hike. An hour up our guide said we were turning back, but half a dozen of us really wanted to run to the top (for me want was stronger than should), so we went rogue and another shuttle was sent to collect us. Not realizing we were only halfway at the time we departed from our guide we ran/walked to the top and then I ran and then walked down. It was the first time I ran in two months, since my surgeon got my last MRI and told me not to do that anymore. Ever. I don’t claim to be the most responsible, and it wasn’t easy – but it was worth it.

Some say nobody likes to exercise. Ironically, I do. A lot. I love coasting the high of endorphins and feeling the the burn in your muscles that has to be earned from putting in work to challenge them. Sadly, I can’t. Not the way that I’d like to. Although I appreciate what I can do – moderate hike. Yoga. Pilates. Spin. Walk.

I got acupuncture that night to quell the swelling, but the next day I knew another long hike wasn’t in my best interest so I decided to reel in my energy and try to strengthen my mental focus with a fly fishing instead.

I’d been told fly fishing was relaxing, almost meditative. The instructor (himself with the patience of a saint) said, “Become an extension of the rod. Feel it move with you.’

I’ve been known to run Type A and have more than average energy, but in the last few years I’ve become a lot better at balancing that energy. I used to abhor yoga because I didn’t see a benefit in standing still and just breathing for long periods of time. Now, I crave yoga and even mediate most days with the guided mediation app Calm. Coincidentally, I met three fun Brits at Summit over the weekend who said to me, “We started this little app called Calm. C-A-L-M. It made their day when I told them I’d not only her about it, but I’d been gifted it, used it for more than a year, and since bought it for friends.

Someone named John Buchanan once said…

“The charm of fishing is that it is the pursuit of what is elusive but attainable, a perpetual series of occasions for hope.”

So, with that mindset I set out to the lake to become one with nature. 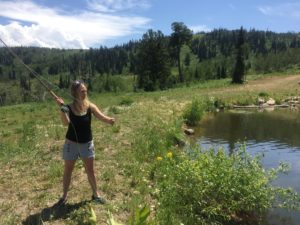 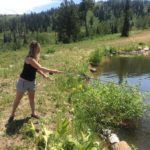 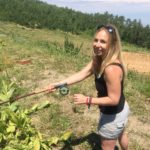 Cast. Reel in. Cast. Reel in. Cast. Untangle plastic supposed to resemble an insect fly from bushes. Cast. Thank the heavens missed head. Cast, have to sadly remove a sunflower from it’s stem to retrieve fishing wire wrapped well around it. Catch no fish. Instructor changes my green fly to red. Cast, catch bushes. Cast, reel in. Repeat. Instructor douses red fly with food-scented something. Fish aren’t biting. It’s been 2 hours and 10 minutes. It’s high noon and I’m hot and highly frustrated. Neither deep breaths nor the serene surroundings of the pond at the foot of a flower-covered mountain are going to calm me for much longer.

“Be patient and calm – for no one can catch fish in anger.”
~Herbert Hoover

I say, “Three more casts and I’m done.” My instructor says believe I will because he does. Next cast out, I caught a fish. 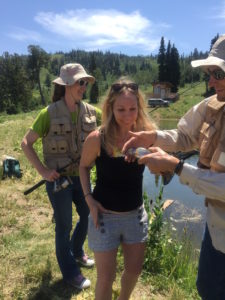 I had no idea how slimy a live trout would be… 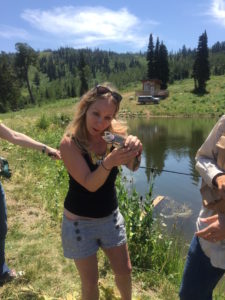 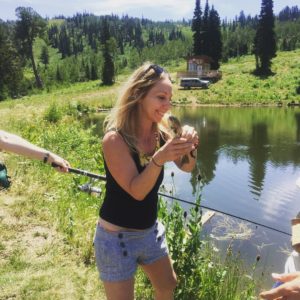 As I scooped the trout out of the net I don’t know why it surprised me house slimy it was. I thanked it for biting my bait. I told it I was going to set it free and when I walked to the water to set it in, it jumped around so much it freaked me out and I more tossed it, not gently, back into the pond. I was told it quickly swam away. I’ll go with that.

My parents used to say at dinner, ‘Try it, if you don’t like it, don’t finish it.’ They used to have me try everything once, but never forced it on me if I then made an informed decision it wasn’t for me. So was fly-fishing. I’m thankful to have had the experience, but I don’t think I’m going to be purchasing a rod in my future.